The spot resin markets were active to begin November, with generally adequate supply and mostly lower prices. Spot-trading  platform, The Plastics Exchange (TPE) noted that there was relatively high number of transactions completed, especially considering it was the first week of the month, which is often slow.

The spot resin markets were active to begin November, with generally adequate supply and mostly lower prices. Spot-trading platform, The Plastics Exchange (TPE) noted that there was relatively high number of transactions completed, especially considering it was the first week of the month, which is often slow. October polyethylene (PE) contract negotiations were contentious and might not yet be fully settled. While most producers took a firm stand down $0.03/lb, several relinquished another $0.02/lb granting processors the entire $0.05/lb decrease they sought. Polypropylene (PP) contracts settled early in the month down $0.14/lb, following the same change in polymer grade propylene (PGP) monomer. PP contracts will likely drop another $0.04/lb in November, perhaps even more, PE producers will seek to recoup the nickel lost in October. 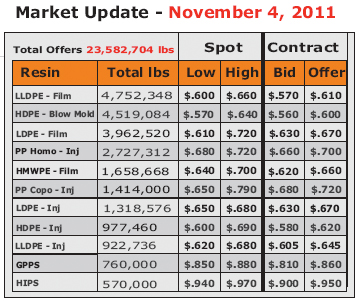 Energy prices were mixed, as December crude oil futures continued their winning ways, edging up another $0.94/bbl to finish at $94.26/bbl. Crude has rallied nearly $20/bbl in the past month, reaching its highest level in about 3 months. December natural gas futures gave back about half of the previous week's gains, sliding $0.14/mmBtu to settle at $3.783/mmBtu on Friday. The crude oil : natural gas price ratio sits at 25:1, its widest spread since April.

Ethylene spot prices recovered about $0.01/lb, erasing a quarter of the previous week's losses. Ethylene for November delivery most recently transacted at around $0.49/lb, as the week saw only mild trading activity. The forward curve is fairly flat but with an upward bias, with material for the next 6 months or so priced around $0.50/lb. The net transaction price (NTP) for October ethylene was declared at $0.54/lb, a half-cent below September.

Polyethylene (PE) spot prices were pressured lower as several producers reluctantly complied with processor requests to drop October contracts by $0.05/lb. Producers had previously held strong at just a $0.03/lb decrease. There was a flip side to the relief, however: just as news of the larger decrease was circulating, November began and producers again started pushing a $0.05/lb price increase. This their 7th monthly attempt. Average PE prices were $0.01-$0.02/lb lower last week, while low-density (LDPE) film grades remained the weakest PEs, falling another $0.03/lb. LDPE developed a huge premium of around $0.25/lb to linear low-density (LLDPE) film during 2010, mostly as a result of production issues. That price differential has slowly eroded back to single digits in 2011.

Propylene spot prices were steady to higher in light trading, with November polymer grade propylene (PGP) last trading at $0.585/lb, up a half-cent for the week. That level was also a half-cent below where it traded earlier in the week. Reportable volumes of refinery grade propylene (RGP) did not appear to transact in the spot market, with the monomer previously trading at $0.48/lb. November PGP contracts have been nominated to decrease by $0.04/lb, and TPE notes that any further advancement in negotiations has not been heard. October PGP settled at $0.64/lb down $0.14/lb.

Polypropylene (PP) spot prices were steady last week as the market consolidated. The deeply discounted deals prevalent in mid-to-late October are gone, and the low-end of the market has cleaned up for the time being. TPE CEO Michael Greenberg noted that the general consensus seems to indicate that the $0.04/lb decrease nominated for November PGP monomer contracts is reasonable and if it takes hold, PP contracts would follow suit, but it is still possible for the decrease to be a bit larger. With supply more under control and contract monomer estimated to settle around $0.60/lb, spot offers for generic prime PP railcars have been pulled higher, rising back into the high $0.60s to low $0.70s/lb. Offgrade railcars are still seen in the low-to-mid $0.60s/lb, and with the recent market stability some traders with inventory have become less aggressive to sell material at a loss, others are still liquidating.

It seems that resin producers did a pretty good job selling surplus material during the latter part of October. The November PP contract decrease has already been priced into the spot market for a few weeks. With burdensome inventories eliminated, the bottom of the market has lifted, particularly for PP. The PE market did slide a couple cents this past week, largely due to an added $0.02/lb contract concession provided by several producers, but November has also brought a renewed effort to implement the same $0.05/lb increase nominated more than a half-year ago. Processors have become numb to the nickel and are already positioning by talking about reducing year-end inventories as they anticipate a seasonal slow-down in demand. Export interest has perked up, but a meaningful uptick in spot transactions has not yet been seen.