Genomatica today revealed that major nylon intermediates are the focus of its third publicly-disclosed development program. The aim of the nylon intermediates program is to deliver biobased processes for the production of the nylon building blocks hexamethylenediamine, caprolactam and adipic acid (HMD, CPL and ADA). These three chemicals, with a total market of over $18 billion per year, are used primarily in the production PA 6 and PA 6,6.

Genomatica today revealed that major nylon intermediates are the focus of its third publicly-disclosed development program. The aim of the nylon intermediates program is to deliver biobased processes for the production of the nylon building blocks hexamethylenediamine, caprolactam and adipic acid (HMD, CPL and ADA). These three chemicals, with a total market of over $18 billion per year, are used primarily in the production PA 6 and PA 6,6. The company is developing complete process technologies for the biobased production of all three intermediates, which it will then license to major firms in the nylon value chain.

This third program follows the successful commercialization and licensing of  the company's GENO BDO process - among others, to BASF, that produced its first commercial volumes of bio1,4-butanediol (BDO) based on Genomatica's process last year November - and the major strides taken in its butadiene program, which has gained over $100 million in industry support, with Versalis and Braskem as anchor partners. These agreements with Braskem and Versalis provide a commercialization path in all major butadiene-producing and consuming regions of the world. Genomatica is planning a similar approach in its nylon intermediates program. The company is inviting leaders in the nylon value chain to join as development partners, who will have the opportunity to engage throughout the program, influence priorities and gain early access to the resulting process technology. Genomatica believes that such access can provide important time-to-market and competitive advantage to program sponsors. 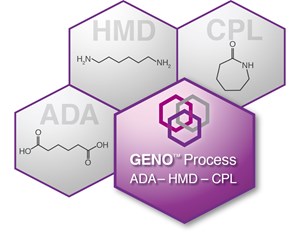 Genomatica has been building a comprehensive set of nylon program assets over the last few years. The nylon program builds on a large body of intellectual property (IP), which includes, but is not limited to eight issued U.S. patents and numerous pending applications worldwide, as well as trade secrets that include engineered strains, with some of the IP developed internally and some from a recent IP acquisition. The early results are promising; a number of the concepts described by Genomatica's patent filings have been validated in experimental proofs of concept, demonstrating feasibility. These include the successful demonstration of certain metabolic pathways; production of certain nylon intermediates in various microorganisms; and efficient methods to produce and recover certain nylon intermediates from the fermentation.

Genomatica is focused on developing biobased processes that deliver the exact same chemicals as those made with petroleum-based feedstocks, along with better overall economics and greater sustainability. The company's biotechnology platform combines process engineering with predictive computational modeling and experimental laboratory technology in a systems-based approach, enabling the development of highly efficient manufacturing processes faster than traditional process development methods. For nylon intermediates, Genomatica's processes are intended to provide on-purpose alternatives to current processes while avoiding the price volatility or limited supply sources of current raw materials such as benzene or adiponitrile. Genomatica's technology also has the potential to avoid unwanted byproducts and waste streams characteristic of many current processes.

"Genomatica's team, broad IP portfolio and integrated biotechnology platform enable us to develop processes for multiple high-volume chemicals," said Christophe Schilling, CEO of Genomatica. "Nylon intermediates are of high interest to us, and a natural target for our R&D and process engineering strengths. We're excited to formally unveil our nylon program."

Development of commercial processes for nylon intermediates is expected to take several years, and follow a sequence of technical, partnership, scale-up and commercialization milestones.