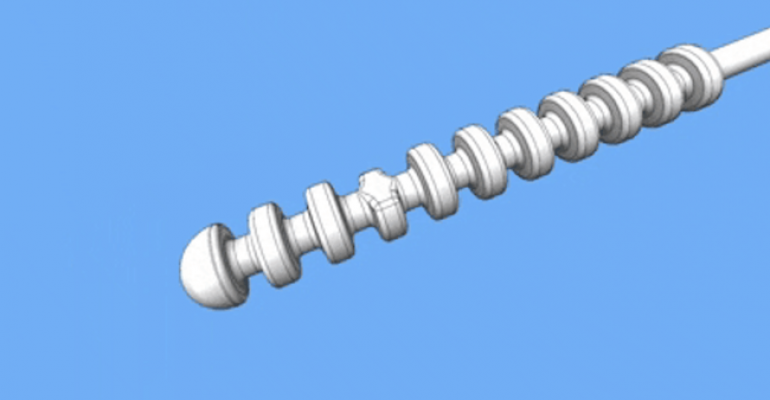 The swab with a flexible, honey-dipper-like design can be injection molded in a single-step, thus reducing cost and accelerating production compared with conventional swabs.

An injection-molded plastic test swab with a corkscrew-like tip could help address the global shortage of swabs needed for COVID-19 testing. The nasopharyngeal swabs developed by researchers at the Wyss Institute at Harvard University in conjunction with medical, research, and industrial partners could be manufactured quickly at high volumes. They are currently in human trials at SUNY Downstate Medical Center and Translational Genomics Arch Institute (TGen), an affiliate of City of Hope, and in preclinical evaluation at six hospitals. If all goes according to plan, California-based medical device manufacturer IPB Inc. could produce 200,000 swabs per day by May 15, according to the Harvard Gazette.

Conventional nasopharyngeal swabs consist of an injection molded plastic handle and a tip made of a soft, absorbable material. The swabs are manufactured in a multi-step process and must be assembled, sterilized and packaged. By contrast, the swabs developed at the Wyss Institute with a flexible, honey-dipper-like design can be injection molded in a single-step, thus reducing cost and accelerating production.

The researchers considered 3D printing but quickly ruled it out as a manufacturing tool because of the cost and limited number of suppliers capable of producing the swabs at scale, writes Lindsay Brownell of the Wyss Institute Communications Department. The team did make ample use of 3D printing to develop and test swab designs, however, which they shared via video calls and e-mail — social distancing prevented them from physically working in the same space.

The swabs currently being tested in hospitals and health centers were injection molded by Protolabs with a medical-grade polypropylene co-polymer.

Experts have estimated that the United States needs to more than triple the number of daily COVID-19 tests in order to safely re-open the country by mid-May, Richard Novak, PhD, Senior Staff Engineer at the Wyss Institute, told Brownell. “These new swabs can help meet the critical need for collecting samples, both to diagnose patients and to study the virus itself so that treatments and a vaccine can be found sooner,” added Wyss Institute Founding Director Donald Ingber, MD, PhD.

“Besides addressing the immediate need for swabs, we think that this new design can have sustained use beyond the pandemic because its manufacturing process is cheaper and more streamlined,” said research assistant Ramsés Martínez. That will make the new swabs “viable in economies outside the United States and hopefully prevent such a shortage from happening in the future,” added Martínez.