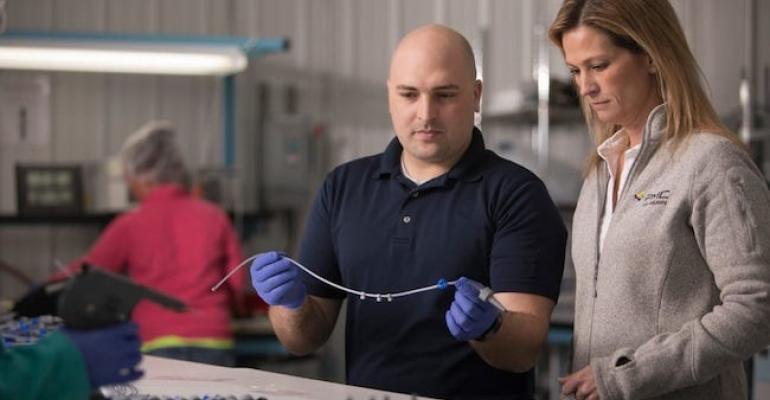 To fill positions created by the expansion, PMC Smart Solutions (Shelbyville, IN) developed innovative programs to recruit and retain employees.

PMC Smart Solutions (Shelbyville, IN) tripled its medical device manufacturing space last year, part of a $5 million construction project that also targeted high-growth applications in the electric vehicles sector. That expansion created a new challenge for the company: Recruiting qualified employees to fill critical positions. With the national unemployment rate at a nearly 50-year low, companies must innovate beyond offering competitive salaries and a generous benefits package to attract talent. For PMC, that begins with what it calls a supportive, employee-first work culture to retain workers and an internship program articulated around a train-to-hire model.

Between 2017 and 2018, PMC expanded its pool of salaried employees by 30%, some of whom were recent graduates from nearby universities. One of those new hires is Alex Bachman, a process engineer at PMC. A graduate of Shawnee State University with a plastics engineering degree, Bachman said he was immediately attracted to PMC’s supportive work culture, which includes on-the-job training and help with college expenses. “It was an opportunity for me to continue my education through training and getting into my master’s degree. That’s huge for me; the more you’re taught the more you’re worth. And then you can bring it back to the company,” said Bachman.

PMC will need more recruits like Bachman, as it anticipates another banner year that will require hiring new personnel in a tight labor market. The family-owned company provides design and development, plastic injection molding and assembly services to the global medical technology sector, which is forecast to grow at a steady pace for the foreseeable future, reaching nearly $800 billion in sales by 2030, according to a report from business consultancy KPMG (Amstelveen, Netherlands). Tapping into that market as a contract manufacturer requires a targeted skill set that PMC has honed over the years, as Lisa Jennings, President and CEO, explained to PlasticsToday.

PMC has focused its efforts in the most innovative, growing segments of the medical technology market, such as robotic surgery, ophtalamology and electro-surgical devices, noted Jennings. To fulfill customer expectations, PMC has developed extensive experience in injection molding and many secondary, assembly and packaging services to provide complete contract manufacturing of complex finished medical devices. “This requires the highest level of quality and manufacturing systems to support customers in developing and producing these devices on their behalf. Roughly 60% of our products are not opened and used until they are in the operating room,” said Jennings. This capability responds to demand among medical device OEMs for contract manufacturers who are able to design, develop and manufacture complete medical devices rather than parts and components, she explained.

“Customers are seeking a partner to work with them from early-stage development of a project through the product lifecycle. PMC has a proven track record in assisting customers with plastic component and assembly design, as well as working with very challenging raw materials and extremely precise tolerances. Our plastics and engineering teams are considered world-class in this area,” said Jennings. The FDA-registered, ISO 13485:2016–certified company offers insert, two-shot and over-molding services and has a Class 8 cleanroom on site.

A woman at the helm of a manufacturing company

PMC is certified as a Women-Owned Business Enterprise by the Women’s Business Enterprise National Council (WBENC). In past years, women-owned ﬁrms employed about 19 million people and generated $2.5 trillion in annual sales, according to the WBENC. Nevertheless, it’s still fairly rare to find a woman at the helm of a manufacturing company, and I asked Jennings if she encountered any cultural issues in that role. She responded that she is not intentionally running the company differently as a female and pointed to her team as the defining force behind the 90-year-old company’s success.

“I believe our culture is created by our team, with strategic direction and core values set by myself and the leadership team,” said Jennings. “We have the most amazing team of people, from those who have been with us for 40+ years to early-career intern engineers joining the PMC team after graduation.”

Describing the company’s workforce as a melting pot of experience, creativity, innovation and passion that has received awards and accolades from customers for its deep commitment to their success, Jennings graciously acknowledged that it is an “honor to be a part of [that success] alongside such a great team.” While she has never really noticed that she was “the only female in the room,” Jennings stressed that she is supportive of growing the number of women in technical fields. “I believe there are tremendous opportunities for all in our market.” As far as her gender influencing the company culture, she added, “it would be good to ask some of our team members.” Michael Parks, Sales Account Manager, offered this perspective.

In addition to a strong leadership team and dedicated workforce, “the culture at PMC is also influenced by being a family-owned business. Having a family-oriented mindset from the top is evident when the employees engage well with one another and work well as a team,” said Parks.

PMC said that it will continue to explore creative ways to expand its workforce to meet growing demands from its customer base, which includes medical device OEMs Medtronic and Stryker as well as such global businesses as Firestone and Bosch.